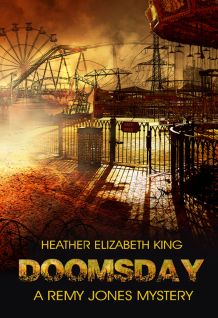 I’ve always thought it would be fun to post an excerpt from a book when it was a WIP, then post the published version of that same excerpt, just to show how much the first draft of a book can differ from what’s published. You learn so much about your characters and what’s happening to them while you’re writing that often the story is completely different from what you originally envisioned it.

That’s the case with Doomsday. I came across the first draft of Doomsday, when I was still calling it Earthstar. The way I initially envisioned this book is COMPLETELY different from what was published. Even my main character’s name is different!

Take a look at the first page of both versions.
Page one of EARTHSTAR (first draft of what would become Doomsday):
CHAPTER ONE
It was seventeen minutes to eleven, nearly midnight, and Georgia’s feet were on fire.
She stepped from the elevator, rounded the last corner, and head to Unit B, silently planning what she’d do once she finished her shift and went home.

She’d definitely shower, that was number one on the agenda; or maybe she’d take a long hot bath. After the bath she’d open a bottle of Merlot and settle on the sofa with a good book. Much to her chagrin she’d never been one of those people who could return home from work and drop off to sleep. It would be close to three in the morning when she got home, but she’d still have to unwind before sleep finally took her.

Sighing heavily, she came to a set of steel doors at the end of the corridor. A red laser shone out of the metal panel set into the wall at her right. She pushed the panel aside, depressed a series of buttons, then stood back.

She waited as the security settings clicked into place, bringing a soft humming from the wall and the myriad machines hidden behind it.

She moved forward and widened her right eye in time for a green laser to flash on and begin the scan. It only took a second. As the panel on the wall whooshed shut a small, rectangular display appeared on the double doors. The soft screen where she had to press her thumb glowed bright indigo. She turned to the display, pressed the pad of her thumb into it, then waited for the locks to disengage. When they did she pushed the doors open and entered a small antechamber where another set of double doors stood. To the wall on her right, above a second security panel, was a small plaque that never failed to send a shiver through her. In neat block lettering it read:
T.I.T.A.N.
Telepathic Indestructible Technologically Advanced Neo-parasites
AUTHORIZED PERSONNEL ONLY

She pushed through the second set of doors and paused at the head of the corridor. Unit B was kept dim for the sake of the inhabitants confined there. The walls were painted a dull, lifeless gray and a series of monitors lined the walls at twenty-foot intervals.
Tucking a fallen strand of sable hair into her bun, she started down the corridor toward the detention chambers.

“Hey yourself, Davis.” She stopped to smile into a camera set in a corner wall at eye level and waved. Experience had taught her that right now Davis, her boss, would be lounging at his desk, long legs spread under the table while he sipped coffee back in the Unit B security center where he, Mike, and Paulo were watching the monitors. His long dread locks would be held away from his face—a face too nice to belong to a man who was her supervisor—and hanging down his back.
________________
Now, here’s page one from DOOMSDAY(the published version):
CHAPTER ONE
Getting off that elevator could very well have been the stupidest thing I ever did. And with my track record, that’s saying something.

I stepped from the elevator and into the basement, then headed to Unit B, the one place in the one-hundred-six story building I should have avoided like the plague. Careful to keep my dagger anchored to my captive’s neck, pointy edge against the hollow of his throat; I edged him forward using the weight of my body. My annoyance made me more aggressive than necessary, but I wasn’t applying much pressure to the knife. I didn’t want to kill the guy, but if he kept up like this I might have to hurt him. Just a little; especially if it meant getting him moving faster. He’d been whining ever since my partner and I ambushed him coming out of the break room thirty minutes ago. I thought a little complaining was par for the course. We did sort of kidnap him after all. But this guy was acting like he’d never had anyone pull a knife on him.

Come to think of it, he probably hadn’t. He wasn’t a parasite like me so he hadn’t grown up in the Underground where someone’d pull a knife on you as quickly as they’d look at you.

“Move it,” I ordered, grinding my elbow into his spine.

“It’s after seven,” he said. “Nobody but level three security comes down here after seven.”

Beside me, Davis snorted. He shoved a few micro braids away from his face with the back of his hand. His brown skin, so like my own, seemed to glow under the lights. “Don’t worry big guy, we’ll protect you from the bogeyman. See this?” He indicated the dual tank blaster he was pointing at the guard with a jerk of his hand. The ridged handle and extended barrel didn’t look nearly as deadly as the weapon truly was. I knew from seeing Davis use it that the weapon could blast a hole five inches in diameter through any scumbag. “I don’t think your Bogeyman will like my blaster,” Davis continued, “or the torch my partner has. What do you think?”

Though tufts of brown hair were sticking up at odd angles all over his head, and despite the fact that he was wide-eyed with terror, for a few moments the guard managed to look amused. “Weapons? You think weapons mean anything down here?”
Davis eyed me and smirked. “Weapons mean everything.”

Though I nodded, I wasn’t so sure. Even if I couldn’t imagine a scenario where weapons would be useless, the guard’s fear was genuine. And the closer we came to Triune’s Unit B, the more I realized this guy wasn’t afraid of Davis and me. He was scared of whatever was in UB.

A frisson of excitement danced up my spine. This could be what I’d spent the last couple of weeks looking for.

I worked for Murphy and Associates, a not quite legal investigative firm with an office in Asphodel. Asphodel was the unregulated twin city of Confederation run Bal’Mor (where I now stood). My job was to pose as a scientist at Triune headquarters

There are some major differences, right!

People stress so hard over their first drafts, but a first draft is rarely what an author publishes. I’d say never, but I’m sure there are a handful of authors out there who do. Maybe I should say, no author who wants to be taken seriously ever publishes their first draft.

So relax. Have fun. Finish that book!

0 comments on “Stupid First Drafts…or Before & After”